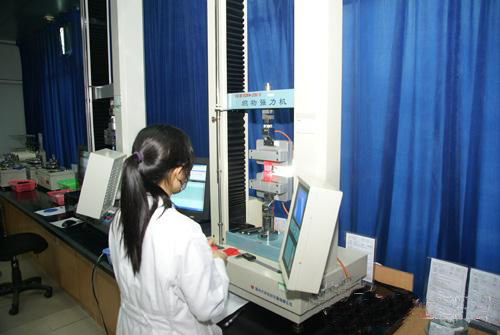 "The rows of boxes you see are the fabrics that suppliers collected from Zhejiang, Jiangsu, Fujian, and Guangdong." After Li Ning's laboratory has carried out the fabric collection classification, the next step is to carry out targeted "medical examinations". According to different needs, the fabrics are tested in different aspects.

Take the initiative to find "things"

Speaking of Li Ningâ€™s veterans, there is also a person who can be described as â€œhardcoreâ€. She is the manager of the quality management department of clothing and accessories of Li Ning (China) Sports Goods Co., Ltd. Since the establishment of Li Ning Laboratories in 1992, the manager has not left Li Ning.

In 1992, when Li Ning established a laboratory in Sanshui, Guangdong, he only had a â€œterritoryâ€ of more than 40 square meters. There was only one light pole commander in the team and he could only test a few basic projects; by 2004, the laboratory needed for development. Moved to the three-story Li Ning gymnastics school in Foshan, Guangdong, and expanded to several hundred square meters. The team of the laboratory has also grown to 30 people (full-time inspectors). Among them, there are 9 technical personnel with undergraduate and postgraduate degrees, and technical personnel account for 30% of the laboratory staff. The main testing items in the laboratory include four categories: physics, chemistry, ecology, and functionality.

There are two things that keep the manager in memory. In the summer of 2004, due to the high temperature and long exposure time, when consumers wear Li Ning's clothes, due to sweating and other reasons, the products appear different levels of decolorization. At that time, distributors all over the country were reflecting the matter and every employee in the central laboratory was anxious.

In order to study the key to the problem, in addition to the laboratory's internal trials, it also sought relevant information from foreign product standards. In addition, it also cooperated with a number of national research institutions, and finally solved the problem and developed the Light and sweat fastness quality testing standards. Since then, a small piece of fabric has added another "experience" link.

Another thing that reminded the manager was that in the past two years, a lot of employees at the terminal store responded. Many customers complained about the problem of thread hooking on fabrics, and as a result there was a lot of retirees, which not only affected the companyâ€™s Sales performance also increases the company's cost of quality.

â€œThe national standard has no specific provisions on the issue of thread hooking on fabrics, and the company has also asked to find a solution.â€ The manager said that when he received the task, there was no pressure, but she was surprised that the center The lab re-tested again and found no loopholes. "In the end, what part of the problem is it? Isn't the test not careful? Again, the result is still the same." This time the rework made her cool to the bottom.

After consulting the materials and consulting with fabric manufacturers, we finally found the crux of the matter. The main problem is that the long fibers of this type of fabric are easier to snag, and changing the structure of the fabric can avoid this phenomenon if the float is shortened. After discovering the problem, Li Ning Company made a "major adjustment" to the structure of such fabrics, and solved the problem of hooking without affecting the quality and aesthetics of the product.

The manager told reporters with excitement: "This year, we have drafted the "Knitting professional sportswear general technical requirements," the national standard, we will hook the assessment of the items and requirements added to the current standards are soliciting opinions across the country ."

What is the value of the brand? The manager thinks that the fabric is a very important part.

â€œIn addition to the Foshan Central Laboratory in Guangdong Province, Li Ningâ€™s headquarters also has a laboratory that is mainly responsible for the testing of fabrics for passing or not.â€ The manager said that for a clothing tester, the tester consists of countless suction cups. By sticking different small suction cups to different positions in the human body, the relevant data of the tested person will be measured immediately. This data can be used to understand the temperature changes of the various parts of the body during the exercise.

Director Wu said that there are two main tasks in the Foshan Central Laboratory. The first is to cooperate with the company's R&D, development and production of quality control of the front material. The new materials developed can only be qualified for garment design and development. The developed garments can meet the company's quality requirements only after they have been tested. â€œIn the production process, we require the fabric supplier to provide inspection reports for each batch of fabrics, and the central laboratory tests and compares.â€

Another key task is to verify the newly developed material properties of the R&D department, and to draft and revise company standards and national and industry standard services for the company. â€œIn the past, the laboratory focused on fabric testing and quality supervision. At present, the main responsibility of the lab lies in the research and development of new fabrics,â€ said Wu Zhuren. For example, in the past few years, ATdry, the exclusive sweat-absorbing fabric developed exclusively by Li Ning, was , got a good feedback in the market.

â€œAt present, the biggest challenge is time, because every time customers use fabrics to test, they want to produce results as quickly as possible. Every fabric inspection takes hundreds of hours. This problem is the biggest headache for us.â€ The manager said with reluctance Of course, in addition to objective factors, there are also subjective factors, such as time management, and we must also rationally allocate time for the fastest possible task.

As for the future of the central laboratory, both the manager and the director Wu agreed that the future center laboratory will focus on product research and development. Therefore, it is necessary to strengthen the supervision of the fabrics used in the factory and send the testing and other work to the laboratory of the factory. The Li-Ning Central Laboratory is a functional professional inspection agency for professional sporting goods. It is a nationally accredited laboratory. Its ultimate goal is to be able to develop testing methods with independent intellectual property rights and to develop testing equipment, to participate in and lead the industry and national standards. The formulation of this plan can represent the participation of relevant industries in China in the formulation of ISO standards, making Li Ning's testing methods with independent intellectual property rights one of the world's leading detection methods.